Lady Luck was on my side this morning. I woke up at 5am and felt strangely awake (unusual for me) and had a thought about capturing a sunrise rather than my usual sunset fetish. I looking on the BBC weather website and it was forecast partly cloudy (being dark outside). I was in two minds as I left the house and looked at the heavens. I thought ‘I’m up so go with it’.

I drove up to Haytor, thinking on the way up, that it was prob the closest place to get to and one which I could grab a sunrise and get a decent horizon as it rose easterly. I got out the car and glad I had wrapped up warm (pj’s under walking trousers and 2 jumpers) as it was about 3 degrees but luckily as I got to the top of the tor it wasn’t too windy. I clambered up the steps and hand holds on the west tor and settled in for the rise. I was conscious it was dark and there was a 40 or 50 foot drop off the back of the tor!

I had taken the zoom and wise angle lenses (24-104mm and 17-40mm) which both proved to be a good idea. As I set up there was an angled area of thin cloud in the easterly direction but the remainder of the sky was fairly thick cloud. There was a pink hue around 5.30 am and I wasn’t sure what mother nature had in store. As sunrise drew near the sky turned blood-red and I became very excited but then the sun rose and it was huge and scarlet and was one of the best sunrises I have ever seen on Dartmoor. I have to admit I nearly wet myself and was awestruck at the beauty before me (not trying to sound pretentious or soppy).

I fired away with the wide-angle but as the sun rose I had to try to capture more of the sun so I swapped for the 24-105mm. Bit risky but wanted to get the most from this morning. I kept readjusting different POV’s and between portrait and landscape and adjusting the hard grad (3 stop) I was using.

I think the captures below speak for themselves in that it was a truly amazing morning and I was glad to have been lucky in witnessing it and very lucky that lady luck was on my side today! 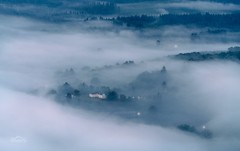 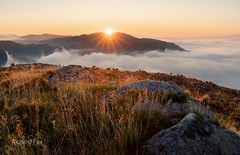 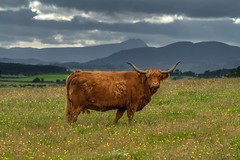