Again the weather report changed from bad to good on Sunday. Initially the report was for cloud and rain but that was to clear to produce a clear sky by 10pm. My wife and I decided to pop out to the closest high point namely Haytor to see the solstice super moon rise from the sky but also given the clearing weather I took my camera to grab a sunset if it looked good. My wife packed her warm gear and a flask of tea and snacks. I wore my fleece knowing although it was warm but breezy lower down it wasn’t going to be like that 300 metres above us and this was confirmed as we arrived at Haytor. There was a school party the so we moved on to Saddle Tor. Saddle Tor is one of my favourite places as it’s less busy and you are at the centre of Haytor, Holwell, Hound and Rippon Tors.

As we made our way up the south slope from the car park the wind whipped up and was blowing a hooley when we reached the top. My wife took shelter in the crevices of the tor as I ventured on top. I had to lay down and kept the tripod low but the camera was still shaking. I had to hold it down on occasions! As the cloud rolled back a little from earlier and the sun dropped towards the horizon there was a fabulous cleft in which the sun shone through. The red light clipped the clouds above Rippon Tor on the opposite side and I had to scramble around and lay down lo enough to get a shot. I managed a couple of panoramas and then ran back around the northern part of the tor then the flames of hell erupted from the sky as yellows, reds and crimsons broke through.

The land beneath unfortunately started to dull, which was a shame, as I tried to compose and decided to swap lenses from my 17-40mm to my 24-105mm so I could zoom in to make the sky the dominant feature in the shot. By the time the light faded I was bordering on hypothermia and my wife had already gone back to car to drink her hot tea. The easy bit of the evening I thought, was setting my lenses to f/11 for increased DOF and ISO 100, the hard bit was getting the grad inline (and on the lens) and keeping the camera still whilst perching on the tor without getting blown off it and down the 50ft drop.

After I had packed up, on the opposite side the super moon had risen and the sky was starting to darken. An amazing sight as the moon was still flooded in golden light. I tried my best to capture it (after getting all my kit out again) with a 2x converter and my 105mm setting but the wind was just too great. I had to resort to ISO 1000 to even try to get a steady shot and the results were a bit grainy (should have activated the NR). However was not all bad as my wife and I sat in the car, alone, sipping tea watching the wispy clouds move in front of the huge moon before us. 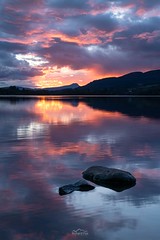 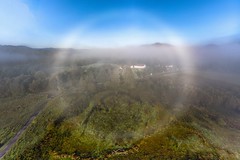